skip to main | skip to sidebar

Letters brought out the poet in people. Letters were lovely to receive in your mail, too.

Just recently, a letter was discovered which made news. It was written by a young husband and father who worked aboard the RMS Titanic.

His last letter to his wife was posted just before the ship set sail on its doomed maiden voyage.

His name was Richard Geddes, and he wrote an affectionate letter to his wife Sally:

“My dearest Sal, We got away yesterday after a lot of trouble.

"As we were passing the New York and Oceanic the New York broke her ropes and very nearly ran into us, but we just happened to avoid a collision.

“I hope you are feeling good and not worrying. I am feeling pretty good.

"With fondest love and kisses to my dear wife and kiddies.

(You don't hear that nickname for Richard as much these days, but back then there were a lot of Dicks. There are a lot of them now too, but in a completely different way, I dare say.)

This letter made news because no one knew before about the near-crash with another ship shortly after the Titanic set sail.

What struck me about this beautiful letter was the warmth, love, and affection in the words of this 31-year-old man.

People would commonly address others in letters as "My dearest.." and sign themselves "Your affectionate..." and much more.

But here's the truth:

Despite the fact that people don't write letters the way they used to....

Men still have this love and affection in their hearts.

Men still want to find the right woman to bestow all this love upon... not just for a short time, but for life.

Now how can this be when your man is acting distant?

When he's being distant, you must not lose heart.

You must not take this as a sign to lose your confidence!!

You must distance the distancer.

If he's pushing you away, then don't be around. Go off and live your life.

Be the woman he has to find.

Be elusive. Let him wonder what YOU'RE thinking.

Are you a mystery to him, or are you always an "open book"?

Which one intrigues him more?

I think you know the answer to that!

When you aren't always spilling out all your feelings to the point that it's TOO much for him to handle...

Then he can relax with you!

That's a key part of the Essence of Being Hard To Get.

Giving him more distance than he wants is KEY.

But this doesn't mean you don't come back to him when he makes a grand gesture in your favor!

Men love to prove their love... if only you let them!

Have a great day, and keep your Flirt on!

With love,
Mimi Tanner
Author of Hard To Get: The Timeless Art of Conquering His Heart

The Reverse Ultimatum: Let It Be His Idea

Mimi Tanner's legendary email column for women is one of the longest running, most beloved relationship advice newsletters in the world, read by over a million of readers worldwide since 2005.

Mimi's message resonates with millions who recognize that the psychology of human nature is the key to love, self-respect and happiness.

Love it or hate it, Mimi's advice works. Find out for yourself - and enjoy every minute of it! Visit Mimi's website at www.mimitanner.com 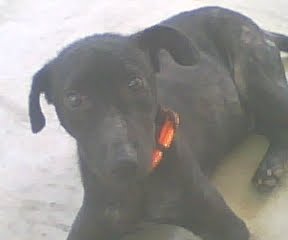 This is Oliver in 2008 not long after recovering from mange...